Pennsylvania Art of the State is a prestigious state-wide competition that in 2017 celebrated 50 years of bringing recognition to artists from throughout the state. It was such a privilege to have one of my photographs, "J. R. the Woodcarver" accepted to this exhibit. And then it was an incredible honor for the photograph to be awarded Third Place Photography! Today I learned that someone purchased this piece. This may be the pinnacle of my photography "career" so I thought it was worth a blog post.... 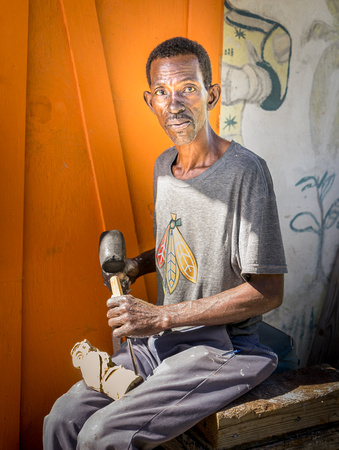 There is an interesting story behind this photo. In February 2016, my husband and I fulfilled a dream by chartering a sailboat and exploring the Exuma Islands in the Bahamas. We had read about Little Farmer's Cay, a small island with a fishing village of about 60 residents, most of them descendants of a freed slave and her children in the 1800's... and about a woodcarver named J. R. Tinker. After sailing to the island and reaching land by tender, we had to walk a good way up a dirt road until we reached his humble home and woodworking shack. J. R. was delightful! We talked a while, and he told us that he was 62 years old, a great-grandfather, and for over 50 years a carver of wooden replicas of native animals. I had in mind before we went there that I would like to ask if I could take his portrait. While my husband paid for the owl that we chose, I walked outside the shack to prepare to photograph J. R. framed in the doorway as he exited. Lighting didn't suit for that, but he immediately sat down to engrave his name in the bottom of our owl, and gave me a perfect opportunity to take a photograph. I took one. Then he smiled and I took another. The first is better- so real. I called J. R. to tell him about the award this photograph has earned, and he is thrilled. Apparently he is showing the print that I mailed to him earlier to everyone who comes on the island, so he (and I) are now quite famous on Little Farmer's Cay! This is what photography is all about for me- a vehicle to connect me to fascinating people and places.

Below is a link to more information about Art of the State and images of the pieces accepted to the 2017 exhibit.