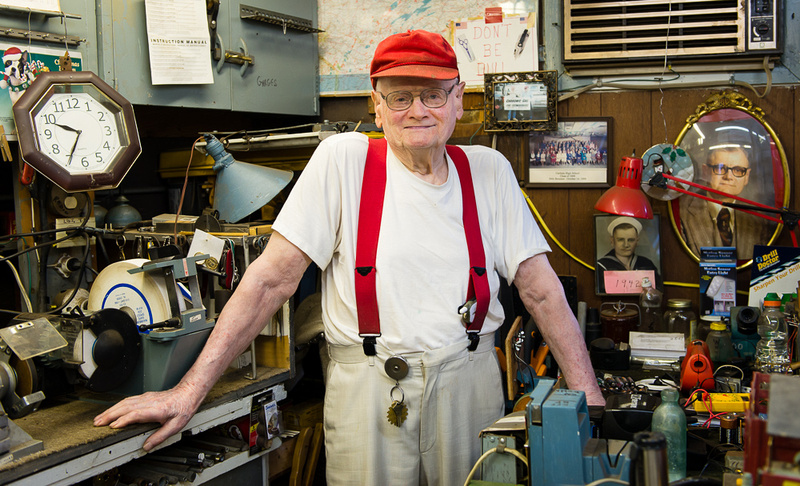 I visited Mr. Tritt's small sharpening shop a few years back when my hair-cutting scissors were in desperate need of his services.  Yesterday, dull scissors in hand, I walked the three blocks from my home to his tidy white-shingled house graced by a small flower-filled yard. A series of hand-printed cardboard signs directed me first to the shop out back,  then back to his house where I had started. I opened the chain-link fence gate leading to the side door and followed the instructions posted there: "Please ring bell." I remembered that Mr. Tritt was hard of hearing, so I rang a bit longer than I normally would. Without delay a smiling man in red suspenders answered the door. He welcomed me inside, warned me about his hearing problem, and asked me if I was in a hurry for the scissors. I had just given my husband a haircut, so I was not. "Then they'll be ready by noon tomorrow." Good enough! He handed me a piece of scrap paper and asked me write my name and phone number. We smiled and said our farewells.

This morning (two hours before the appointed time) I was taking my walk (camera in hand as usual) and took the chance that the scissors were ready. Actually, my guess is that they were ready an hour or less after I dropped them off. Following the same sequence of signs and receiving the same large-grinned welcome from Mr. Tritt, he led me on the short path back to his shop to retrieve the scissors. The door was opened, and I felt like I was stepping into a time capsule. A photographer's delight. Did I gasp audibly? The shop was packed full but as neat as the printing on all the signs. Walls, shelves and floor were covered with tools, old photographs, parts drawers, more signs- orderly chaos. I asked Mr. Tritt if he minded if I took photos of his shop, and perhaps of him too. His smile and the sweep of his arm invited me to go right ahead. I took very few actually, and listened intently as Mr. Tritt answered my many questions. His sharpening business started about 11 years ago. He repairs scissors, knives, lawn mower blades and the like. Before that he had a fire extinguisher business for 29 years, with four employees who worked in that same little shop. I think I was able to pick out four stools and work areas. Some garages out back were used to store inventory, but they're rented out now. Mr. Tritt spent a lot of his time then visiting hospitals and businesses in the area to train them in fire safety procedures. "Did you notice the fetting sign?" he asked. Fetting? I had noticed several "fettling" signs and assumed it was another one of those English words that isn't pronounced the way it looks. I never heard of the word and told him so. He remarked that most people haven't, which is why he has the definition written out on each of the signs: trim, clean, adjust, shape- put in working order. I had to ask about the pronunciation. "Oh, that's the way I say it. Not sure if it's right or not."

When his wife Ann died, Mr. Clair decided to sell the fire extinguisher business, and it continues to thrive. I suggested that he had laid a good foundation which has helped the new owners succeed. He smiled and nodded, a little embarrassed by the compliment. As I quickly counted back from age 93, I realized that there must have been at least one more career in his past, and sure enough, there were two. For 29 years, Mr. Tritt worked for the Navy Depot in Mechanicsburg, and before that he served four years in the U.S. Navy. "I did my four years, and then that was done," he remarked. I had already recognized him in the photograph of the young man in uniform, and in another near it showing a somewhat older man in a business suit. Same friendly eyes.

I asked if he had children. "Oh yes, five of them. They all look after me." Do they live nearby? "Pretty much. The furthest is in Boiling Springs," (6 miles away). We both chuckled at that, and he pointed to a photo on a clipboard hanging on a rusty nail almost at floor level. "That's my family. Go ahead and take it off there so you can look at it." I met his wife, alongside his two sons and three daughters (all retired and doing well). He wasn't sure whether he had eight or nine grandchildren- hard to keep count. I asked about his training for all these careers, and he was proud to say he was one of 11 or 12 in the first class to graduate from the "Industrial Program" at Carlisle High School. I asked if he graduated at the top of the class. "Nowhere near," and again a big smile.

Though I sensed I could have stayed and talked a good while longer without imposing on him, I pulled out my wallet and looked at the bill that was next to my scissors on the worn workbench: "1-sissors (sic) 5", subtotal 2.25, tax .15, total 2.40". Amazing. It brought tears to my eyes. I thanked him and assured him I would be back with more scissors and knives, and perhaps a printed photograph or two as well. He seemed very happy to hear that, and looked me straight in the eye as he held out his hand to shake mine before I headed out the door. I can't wait to visit again. Once again, photography has opened doors for me that I never could have anticipated.

P.S. I just looked up "fettling" and found this: "Fettling is a word that is used in several different senses. Most of the uses of the word relate to cleaning, polishing, and maintaining systems so that they will be functional or will remain functional. . . . People may suggest that objects in disrepair just need 'a bit of fettling' to be set to rights." I'm thinking that I could probably stand a little fettling myself now and then. How about you?